It’s time for business to close the disclosure gap on child labour!

To mark the UN World Day Against Child Labour, and this year’s focus on the International Year for the Elimination of Child Labour 2021, Global Child Forum’s Nina Vollmer looks more closely at what companies can do to help erase child labour from the map. Her comments below take on a new urgency in light of the report issued this week, ”Child Labour: Global estimates 2020”, published by the ILO and UNICEF showing that , for the first time in two decades, the number of children being put to work has risen to 160 million worldwide, representing an increase of 8.4 million over four years – while millions of other are at risk due to the COVID-19 pandemic.

Child labour is a complex issue, but findings from our benchmark report reveal that closing the disclosure gap, can be one step in the right direction.

Although child labour* has been on the corporate agenda for over two decades, just released statistics from the ILO and UNICEF, show that child labour is increasing and that more than 160 million children are still working under conditions that are detrimental to their development. The report also warns that the numbers will probably keep on rising as an effect of the pandemic. So, there’s still a lot of work ahead of us, before child labour is eliminated. This is not the best news for the International Year for the Elimination of Child Labour nor for the UN Sustainable Development target 8.7** on the elimination of all child labour, due to be fulfilled in just five years. However, there are still things that we all can do, and the largest companies in the world have an important role to play. 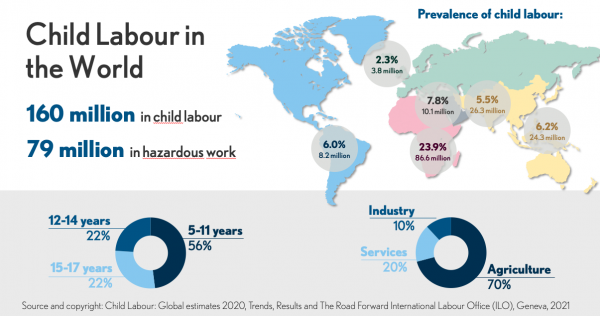 What are companies (not) doing?

The Corporate Sector and Children’s Rights Benchmark, conducted by Global Child Forum in collaboration with Boston Consulting Group since 2014, has been tracking the largest companies in the world, across all sectors, on what they are saying they’re doing to combat child labour.

The benchmark tracks not only whether a company has a policy against child labour, but also if the company shows how their policy is implemented and how they handle risks and impact on children’s lives. 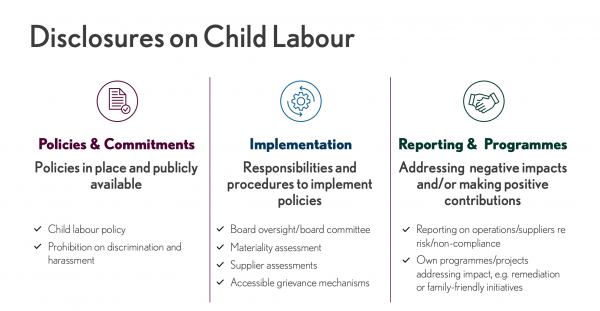 During the same time that according to the ILO and UNICEF, the number of children doing harmful labour, have increased by 8.4 million, we have seen substantial improvement in company reporting, for example in how many companies show they have a policy against child labour. These contradicting trends, show us that most companies can do much more, also those who are already reporting to some extent. One area ripe for improvement is transparency. Companies need to be clear about, not only what they want to do via their policies, but also what they’ve actually done. Or in other words: what impact does their policy have on children’s lives or; what is the risk for child labour in their operations and/or supply chains.

In our latest global report, The State of Children’s Rights and Business 2019, we clearly see this gap between policies and practice – in all regions of the world. Broadly speaking, companies are good at communicating their commitments to their stakeholders but often failed to show how they implement their commitments or the effect of those commitments.

The illustration below, based on our benchmark 2019, shows that, globally, 67% of companies have a child labour policy in place, but only 39% of benchmarked companies also conduct supplier impact assessments and even fewer have a grievance mechanism in place. Finally, only 21% of companies in the study actually report on child labour risks making the disclosure gap from policies to reporting/action quite wide. 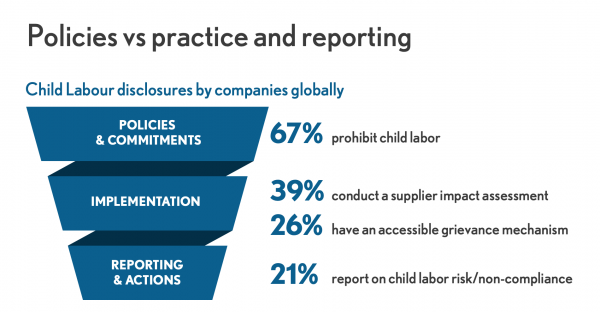 “Child labour isn’t an issue for us!”

When speaking to companies, we hear many reasons for this disclosure gap. However, one of the main reasons for this wide gap stems from the motivation behind creating a child labour policy in the first place. For many of those companies who have a policy in place – for example, fulfilling the requirement as signatories to the UN Global Compact -, but not disclosing how the policy is being implemented or acted upon, their policy serves as a “check box exercise”. In this regard, these companies haven’t fully assessed their risks for child labour, often due to a lack of understanding of what child labour is and how it is connected to their business: We hear, “child labour isn’t an issue for us!” This kind of statement reveals a lack of understanding of the nuances of child labour and its links to corporate activity.

When choosing the best course of action, however, it is important to better understand what you’re trying to fix, and not all child labour is the same: how it manifests and its root causes vary, from the infamous child labourers in factories and mines – often the focus for international consumer boycott campaigns in the Northern Hemisphere – to teenagers making the conscious decision to choose work over education, sometimes out of economic necessity or lack of opportunity, sometimes out of a personal preference, and who may do so legally but still need protection from exploitation and dangerous or harmful work (or to be given the opportunity continue their education if that is what they would like to do, but don’t have the means to).

It’s important to recognize that child labour is not an issue that can be isolated from other social and economic aspects of people’s lives, such as parents earning a living wage, access to paid parental leave, access to education and childcare, protection from exploitation, etc.

Given these interlinkages, the corporate sector needs to start treating child labour as a systemic issue, rather than as a reputational or financial risk. By seeing child labour not as a risk to the business, but as a risk to children (and their families), a whole new perspective and spectrum of potential actions open up, such as: supporting education; reviewing purchasing practices – short lead times, pricing pressure, etc -; family-friendly policies; remediation programmes; supporting youth job skills training; and so on. And this is when we see the gap start to close – moving from policy to positive impact.

Connecting the issue of child labour to areas where companies can act and create a positive impact, makes it clearer how child labour is related to the core business. By focusing on what your company knows about your impact on children’s lives, and what you have done to make the world a little bit better, is all part of understanding the role that children play in your organization, whether or not your company has identified any risks for child labour.

Changing the perspective on child labour and child protection

And much more one the: Child labour theme page in the Global Child Forum Knowledge Centre

* Child labour is defined by the ILO as: “work that deprives children of their childhood, their potential and their dignity, and that is harmful to physical and mental development.”

** SDG TARGET 8.7 – “Take immediate and effective measures to eradicate forced labour, end modern slavery and human trafficking and secure the prohibition and elimination of the worst forms of child labour, including recruitment and use of child soldiers, and by 2025 end child labour in all its forms.”

As Research Manager, Nina’s main area of responsibility is to lead and develop the work on the Corporate Benchmark Studies on children’s rights that Global Child Forum produces in collaboration with Boston Consulting Group. In addition to this work, she also takes on other research projects and works on developing the content/inviting speakers for Forums and events.

She has previously worked at the Dag Hammarskjöld Foundation, the Swedish Teacher’s Union, the Swedish Fellowship of Reconciliation – SweFOR in Colombia and SonyEricsson. She has also held the voluntary position of group secretary for Amnesty Business Group Sweden and been a member of the Board of Directors at Amnesty Sweden.

She has a Master’s Degree in Political Science with a focus on human rights and development from Lund University in Sweden. Nina joined Global Child Forum in 2015.